services.UiConfig.catalogLabel News Feed About Website
Enjoy your FREE PREVIEW which shows only 2021 data and 25 documents. For full access, try it free at any time.

Tesla, Inc has evolved from being known for their electric automobiles to now being known as a sustainable energy company. Offering many services such as solar panels/roofs, residential energy storage, and commercial/utility clean energy storage, Tesla Inc. has hundreds of issued patents, which are now considered open source because CEO Elon Musk believes in the benefit of allowing others to grow this technology platform when used in good faith. 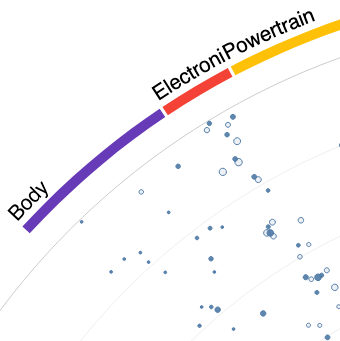 Once known almost exclusively for their cars, nowadays Tesla is less an automotive company and more a sustainable energy company. What began as a quest to create better batteries for their vehicles led to acquisitions and a quest for knowledge that today puts the company in a position to offer solar panels/roofs, residential energy storage, and commercial/utility clean energy storage.

Tesla’s Elon Musk is known for his desire to make the company as vertically integrated as possible – a strategy used by no other car manufacturers around the world. Most manufacturers prefer a system of lean manufacturing with many suppliers to minimize the amount of inventory on-site, whereas Tesla has taken the manufacturing of as many parts as possible in-house. Musk says vertical integration alleviates risk with suppliers and allows flexibility to push improvements to production at any time. None of the Tesla vehicles are a specific model year because changes – not just software but mechanical updates – can be made whenever necessary.

To this note, Tesla has made strategic acquisitions such as Maxwell Technologies for ultracapacitor energy storage, PERBIX for automated manufacturing equipment, Riviera Tool for die stamping systems, and of course SolarCity for solar energy services. Tesla also works with Panasonic on the production of battery cells and has had partnerships with multiple other automotive manufacturers such as Toyota. As of 2016, Tesla was 80% vertically integrated, and this figure has likely increased since.

In another unique strategy, Tesla has hundreds of issued patents but considers them open source. While this means Tesla won’t sue companies over infringement, there's a catch. Tesla asks other companies to act in "good faith" which means that companies using Tesla patents cannot assert any intellectual property right against Tesla or a third party for its use of technologies relating to electric vehicles. Furthermore, companies acting in good faith cannot market or sell any knock-off product- essentially meaning don't copy Tesla's vehicles. Elon Musk announced this strategy because he realizes that more electric vehicles on the road (and more vehicles needing charging stations) is a good thing – it creates a network externality that will not only help Tesla and the clean energy market continue to grow but is beneficial to the environment.

Tesla’s portfolio is largely divided between energy storage devices (batteries), powertrain components, solar power, and car bodies. Investment in solar has largely happened since the SolarCity acquisition, although SolarCity continues to file patent applications in the space. Tesla has also invested in manufacturing, having a good deal of patent documents relevant to its production of seats, and electronics, important for battery control and self-driving technologies. This all indicates that despite the open source strategy, the company is interested in securing the IP space around their inventions.

SolarCity was a solar energy company acquired by Tesla CEO Elon Musk in 2016 for $2.6 billion. Since the acquisition, SolarCity's 125+ patent assets have been used for developing solar panels and roofing, along with developing Tesla's Powerwall batteries for residential clean energy. Since the acquisition, Tesla's solar business has been plagued with multiple lawsuits and challenges. Investors brought a lawsuit against Tesla when it came to light that SolarCity was insolvent at the time of the acquisition, Walmart brought a lawsuit over solar panel fires, and a class-action suit was brought over Tesla’s Solar Roof price hikes. Despite these setbacks, Elon Musk continued to build upon SolarCity's patent portfolio. In the first five years after the acquisition, Tesla added 135 patents and 125 patent applications (all assigned to Tesla) to its acquired solar technology. Among those assets are applications incorporating solar power into the roofs of Tesla vehicles and technology for solar-powered battery storage plants.

The lack of patent assets related to rocket designs or spacecraft control systems was explained by Elon Musk in 2012 when he explained that he did not want China to use SpaceX published patents "as a recipe book." So far, Musk's statement has held up as SpaceX has yet to publish a patent related to their rocket technology, opting to keep trade secrets.

Recent Published Activity in Elon Musk "Inc" as of February 4, 2023