services.UiConfig.catalogLabel News Feed About Website
Enjoy your FREE PREVIEW which shows only 2021 data and 25 documents. For full access, try it free at any time.

A microinverter is used in photovoltaics to convert direct current (DC) generated by a single solar module to alternating current (AC). Microinverters contrast with conventional string and central solar inverters, in which a single inverter is connected to multiple solar panels. The output from several microinverters is generally combined and fed to the electrical grid. The main advantage of microinverters is that they electrically isolate panels from each other, so shading of any one solar module, or even a complete module failure, does not disproportionately reduce the output of the entire array. Each microinverter harvests optimum power by performing maximum power point tracking (MPPT) for its connected module. In the wake of Hurricanes Irma and Maria last year, FEMA provided guidelines on what type of equipment is best suited to withstand powerful winds, recommending microinverters over central and string inverters, stating: We “recommend using microinverters where appropriate. Although these generally cost more than central or string inverters; they have several advantages. Unlike string inverters, microinverters have a greater chance of allowing undamaged panels of a PV array to continue to produce electrical power even if one panel is blown away or damaged by wind-borne debris. In an array using string inverters, if one panel is damaged, all the panels on the string will be offline.” 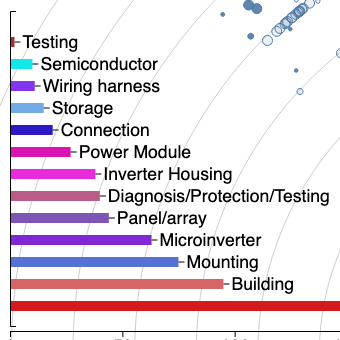 Recent Published Activity in Microgrids: Microinverters as of February 4, 2023